You are here: Home1 / Pilot testimonials 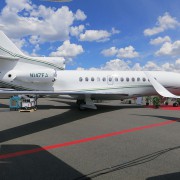 My Captain and I were witnesses but also actors of a LOC-I situation (Loss Of Control In flight) at the end of a leg between Nuremberg (Germany) and Kuala Lumpur (Malaysia) in May, 2011.

We were very fortunate to finally land the aircraft safely and to be able to talk about this incident. We’d like to share our experience with you, while also highlighting how the flight training syllabus at ECAIR can prepare you for such an incident.

First, the details about the flight itself:

Parameters when the incident occurred:

When crossing 12 500 ft, without being warned by any fault message, the airplane instantaneously and violently nosed up because of a Tail Horizontal Stabiliser (THS) technical issue. The latter, for unknown reason, positioned itself to a full pitch up position leading up to a 40-degree attitude, a 4,6-g load factor and a slight right turn.

My first reflex was to counter the pitch up in pushing the stick forward (this action disconnected the AP) but, unfortunately, this action had no effect. Actually, the elevators, responsible for the aircraft pitch movement and located at the THS trailing edge, were hidden because of the THS present position. Simultaneously, I moved the throttles forward to the max power position (which disconnected the AT).

Without any pitch authority and realizing that the speed was decreasing rapidly (138 kts is the lowest recorded speed), my second reflex was to bank the aircraft to put its nose on the horizon as soon as possible in the shortest way. To fulfill my objective, and in spite of sluggish flight controls, I had to bank up to 100° by the right to stop the pitch up event.

As a matter of fact, no action around the roll axis would have left the aircraft climb …and, finally, on the top of this climb, the aircraft wouldn’t have stalled because of the fly-by-wire controls, but it would have fallen with an approximate 100-knot indicated airspeed and a high vertical speed component…and, remember, still without any pitch authority.

After levelling off the F7X with the nose on the horizon, my Captain took the controls and tried to understand what was happening. Then, a second pitch up occurred without, again, any specific reason (for the specialists in aeronautics, this second pitch up is due to the phugoid oscillation phenomenon that exits on an airplane pitch axis).

Eventually, on the top of the second pitch up curve, a safety device in charge of looking after THS movements set off and we recover the aircraft control.

Consequently, as we didn’t know at that time what the problem was, we manually flew the approach and the landing in Emergency. For your information, the airplane climbed up to 24000 feet which represents a 12000-foot altitude difference and the data recorder revealed that, from the first pitch up to the end of the second one, we had lost the pitch authority for 2’13’’ !

The aim of this report is not to find the reasons why this pitch trim runaway occurred, but rather to increase pilots and management staff’s awareness that this kind of extreme situation actually does happen.

Did my military background help me to keep the 7X under control ? (Note: Christophe Desilles is a former fighter pilot of the French Air Force) The answer is: Yes, it definitely did. Thanks to these reflexes, I managed to get out of this unusual situation. But don’t be mistaken, I have acquired these reflexes through dedicated training, and I’m convinced, that without this training, I would have not been able to react appropriately.

Having reviewed the ECAIR UPRT training syllabus in detail, I think it is geared to train pilots to be able to face exactly this type of situation.

We may request cookies to be set on your device. We use cookies to let us know when you visit our websites, how you interact with us, to enrich your user experience, and to customize your relationship with our website.

Click on the different category headings to find out more. You can also change some of your preferences. Note that blocking some types of cookies may impact your experience on our websites and the services we are able to offer.

These cookies are strictly necessary to provide you with services available through our website and to use some of its features.

Because these cookies are strictly necessary to deliver the website, refusing them will have impact how our site functions. You always can block or delete cookies by changing your browser settings and force blocking all cookies on this website. But this will always prompt you to accept/refuse cookies when revisiting our site.

We fully respect if you want to refuse cookies but to avoid asking you again and again kindly allow us to store a cookie for that. You are free to opt out any time or opt in for other cookies to get a better experience. If you refuse cookies we will remove all set cookies in our domain.

We provide you with a list of stored cookies on your computer in our domain so you can check what we stored. Due to security reasons we are not able to show or modify cookies from other domains. You can check these in your browser security settings.

We also use different external services like Google Webfonts, Google Maps, and external Video providers. Since these providers may collect personal data like your IP address we allow you to block them here. Please be aware that this might heavily reduce the functionality and appearance of our site. Changes will take effect once you reload the page.